If you are not familiar with the Children’s Health Defense® they are a 501(c)(3) non-profit organization. Their mission is to end childhood health epidemics by working aggressively to eliminate harmful exposures, hold those responsible accountable, and to establish safeguards to prevent future harm. They are a wealth of information about health, the environment and the current medical model we are living under. They also have CHD.TV where they present weekly a ‘Tea Time’ Episode.

Below is the article referenced in the interview.

A new study by James Lyons-Weiler, Ph.D. and Dr. Russell Blaylock supports the conclusions of a study by Dr. Paul Thomas, published in November 2020 and later retracted after an anonymous reader expressed concerns.

In November 2020, a study that carefully examined 10 years’ worth of data from a pediatric practice in Oregon run by Dr. Paul Thomas was published. Five days following the publication of the study, Thomas’ license was suspended.

A month after that, the journal decided to inform the authors that an anonymous reader had expressed some concerns about the study.

This single reader’s comments that involved bad guesswork led ultimately to the journal’s decision to retract the paper, leaving the authors stunned.

The authors knew that the reader’s concerns had already been addressed during peer review, and expected the journal to rule in favor of not retracting the paper. The journal editorial board knew this, too.

The concern centered primarily on the question of whether the large differences in the number of medical visits required for attention to specific health conditions like anemia, gastroenteritis, asthma, ear infections and many others, were due to parents who did not vaccinate not showing up to their well-baby and well-child visits.

Because Thomas’ license was suspended, he had to focus on his case and try to keep his life from falling apart; the medical board kept postponing the hearing, and no hearing had occurred.

In fact, no hearing has been held to date.

James Lyons-Weiler, Ph.D. suggested to Thomas that perhaps the medical board had overreached by applying a penalty without due process, a fact that Thomas then shared with his lawyer.

When his lawyer wrote the medical board pointing out that Thomas had suffered a penalty without due process, they offered to reinstate his license, pending the outcome of a hearing, on the condition that he do no more research.

This clearly shows the agenda of the medical board was not to ensure that the children in the practice were receiving good pediatric medical care.

It is now clear that the singular priority of the medical board was to shut down Thomas’ practice of abiding by informed consent — as required by Oregon state law for all medical procedures — and to prevent him from sharing any additional findings from the 10 years of data that had been collected from his practice.

Today, the study is revived by a second study, this time conducted by Lyons-Weiler and his medical collaborator, Dr. Russell Blaylock.

In this second study, the following questions were addressed:

The study results, which are found in the paper entitled “Revisiting Excess Diagnoses of Illnesses and Conditions in Children Whose Parents Provide Informed Permission to Vaccinate Them” show that the anonymous reader’s concerns were unfounded; the unvaccinated families made their well-child visits with greater frequency than the vaccinated families.

This study, funded by the public, answers the first questions.

The answer to the second question is “results vary,” but this may be due to smaller sample sizes reducing power (see the study for details).

For the third question, the scientists found that after defining a model that included healthcare visit utilization and age, vaccines were still a significant factor that increased adverse health outcomes, many of which had previously been associated with vaccines.

Moreover, the authors also determined that vaccines were still significant following consideration of the interaction term between vaccination status and the other model factors.

Importantly, had the study authors not considered the interaction term, the results would have seemed to imply that vaccination was negatively predictive of adverse health outcomes.

In the model in which vaccines, health care visits per age and the interaction term was considered, the number of vaccines was a positive significant predictor of overall adverse health.

Interaction terms are usually ignored by studies that “adjust for” variables. Adding covariates into the model without considering the interaction term with the main effect — vaccines — can mask a significant effect on the rates of post-vaccination health issues, providing a misleading result.

It’s worth noting that breastfeeding — another correlate of lifestyle measures — had no significant singular or interaction effects.

Blaylock posed the final question to Lyons-Weiler, who conducted the data analysis.

This reflects the positive health effects of vaccine cessation. 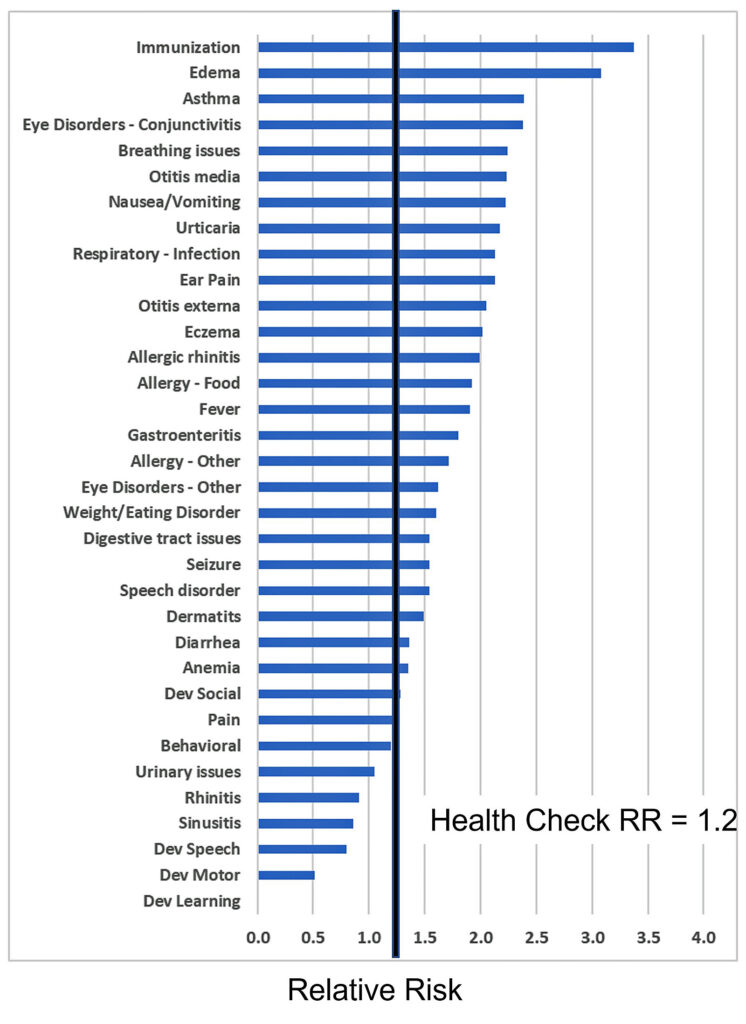 The age-matched effects of vaccine cessation. High Relative Risk values denote increased risk of a given health outcome in patients receiving more vaccines in the older age group (>1,500 days of age). The black bar shows the Relative Risk of HCV between these groups as a baseline.

The relative risk of adverse health outcomes in older children who continued to vaccinate compared to those who ceased vaccination in Thomas’ practice.

The method, “Relative Incidence of Office Visits,” had already been shown to be more powerful.

Lyons-Weiler reports that this is necessarily so because the measure contains more information than mere rates of diagnosis.

The RIOV measure has a higher dynamic range than odds ratios and relative risks based on diagnosis only. Studies that focus on the rates of diagnosis are using a subset of RIOV but are only limiting their count of office visits to that for the initial diagnosis.

The authors estimated that vaccination increases the need for visits to the doctor for vaccine-related health outcomes at a rate of 2.56 to 4.98 new chronic-illness-related visits per unit increase in vaccination per year.

“That translates into far more chronic illness in vaccinating children than in those not vaccinating, a disease burden that is not considered in risk: benefit considerations when it comes to vaccine policies and laws,” said Lyons-Weiler.

The paper, which was subjected to blinded peer review, describes all of the details of the results, is open access, and is published in the peer-reviewed journal International Journal of Vaccine Theory, Research, and Practice.

The views and opinions expressed in this article are those of the authors and do not necessarily reflect the views of Children’s Health Defense.