2. You’re drinking a little bit of chlorine in every sip, which depletes iodine in the body negatively effecting the thyroid and the entire endocrine system.

3. Heavy metal toxins like lead, mercury and aluminum are often present — in fact, just last year the EPA knew about the tap water in Flint, Michigan, being highly contaminated with lead but still hid that fact from the public for months, all while children were being poisoned. 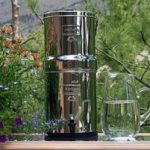 4. You’re ingesting other people’s medications: “There’s no doubt about it, pharmaceuticals are being detected in the environment and there is genuine concern that these compounds, in the small concentrations that they’re at, could be causing impacts to human health or to aquatic organisms.” – Mary Buzby, Director of Environmental Technology for Merck. One study sighted frogs with both male and female genitalia due to heightened estrogen in the water.

5. Hexavalent Chromium 6, a cancer causing chemical, is now widely known to be in 75% of American drinking water.

6. You’re drinking little doses of deadly insecticides and herbicides from commercial agriculture that adds up over time causing a litany of health issues.

7. There are virtually no minerals left in tap water — it’s been stripped of all nutritive qualities by the chemicals used to treat it.

9. It actually dehydrates the body instead of hydrating it. (The chemicals in tap water drain vitamins and minerals from the human body over the long term.)

10. Fracking. If you live near a fracking site, studies have shown entire groundwater resources can be contaminated with chemicals linked to hydraulic fracturing, or fracking.