Oftentimes people come into my office and are very excited to tell me that they have become vegan. Veganism is very hip and trendy right now so they are excited about books and blogs they have read informing them that they made a great health decision, a humane decision and a green planetary decision.

I never like to rain on anyone’s parade and respect their choice to choose whatever diet they feel works for them; however, I usually suggest being vegan for 6 months or so. After that period of time, they usually start to show cardiovascular weakness and muscle deterioration as a result of the diet. Part of the problem is propaganda. People blame meat for a lot of ailments, including both cancer and heart disease, not taking into consideration refined packaged and processed foods. When discussing heart disease it is important to point out that it can be caused by genetic clotting factions as well as weak arteries, which are caused by poor diet resulting in chronic cellular inflammation, thus resulting in heart disease and other chronic conditions.

Below are 6 myths that I have selected from the Weston A. Price Foundation to explain why I do not advocate veganism long term. Enjoy! 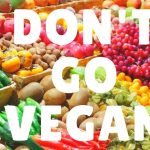 Myth #1: Meat consumption contributes to famine and depletes the Earth’s natural resources.
Agricultural animals have always made a major contribution to the welfare of human societies by providing food, shelter, fuel, fertilizer and other products and services. They are a renewable resource, and utilize another renewable resource, plants, to produce these products and services. In addition, the manure produced by the animals helps improve soil fertility and, thus, aids the plants. In some developing countries the manure cannot be utilized as a fertilizer but is dried as a source of fuel.

Myth #2: Meat-eating causes osteoporosis, kidney disease, heart disease, and cancer.
Research on protein intake and bone loss clearly showed that protein consumption in the form of real meat has no impact on bone density. Moreover, although protein-restricted diets are helpful for people with kidney disease, there is no proof that eating meat causes it. In addition, outside of questionable studies, there is little data to support the idea that meat eating leads to heart disease. Lastly, the belief that meat, in particular red meat, contributes to cancer is, like heart disease, a popular idea that is not supported by the facts. Although it is true that some studies have shown a connection between meat eating and some types of cancer, it’s important to look at the studies carefully to determine what kind of meat is being discussed, as well as the preparation methods used and what type of cancer is being studied.

Myth #4: Meat and saturated fat consumption have increased in the 20th century, with a corresponding increase in heart disease and cancer.
Statistics do not bear out such fancies. Butter consumption has plummeted from 18 lb (8.165 kg) per person a year in 1900 to less than 5 lb (2.27 kg) per person a year today. Additionally, Westerners, urged on by government health agencies, have reduced their intake of eggs, cream, lard, and pork.

Myth #5: Soy products are adequate substitutes for meat and dairy products.
Soy is one of the most genetically modified foods on the planet and is considered highly toxic by the scientists at The Institute for Responsible Technology as well as doctors who are GMO literate.

Myth #6: Eating animal foods is inhumane.
While some commercial farming practices are not, it is possible to raise animals humanely. This is why organic, preferably Biodynamic, farming is to be encouraged. It is cleaner and more efficient and produces healthier animals and foodstuffs from those animals. Each person should make every effort, then, to purchase organically raised livestock (and plant foods). Not only does this better support our bodies, as organic foods are more nutrient-dense and are free from hormone and pesticide residues, but this also supports smaller farms and is therefore better for the economy.