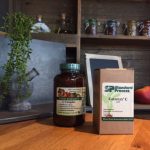 n the early twentieth century, investigators began discovering that certain noncaloric elements in food, or vitamins, are required for the proper functioning of the body. Chemists, following the reductionist thinking of the time, assumed that each vitamin was a single chemical compound, and soon the scientists were not just claiming to have identified these single chemicals but were synthesizing and selling them to the public as nutrients.

There was a problem, however. When nutrition researchers compared the effects of synthetic vitamins with vitamins in food, they discovered that the former did not truly duplicate the action of the latter. In fact, synthetic vitamins appeared to cause some rather troubling health effects. But with the upstart investigators no match for the powerful pharmaceutical companies profiting from synthetic vitamins, this truth was effectively withheld from the public.

Dr. Royal Lee illustrates the profound differences between synthetic and natural vitamins by comparing the single chemical ascorbic acid—what is commonly considered vitamin C today—and natural vitamin C, a synergistic complex of compounds that includes not just ascorbic acid but assorted bioflavonoids, vitamin K, and tyrosinase, an enzyme so critical to adrenal health that it was declared the “active principle” of vitamin C by the country’s top endocrinologist at the time. Over half a century later, Dr. Lee’s words are still as revolutionary as they are illuminating:

OK, natural vs. synthetic. Let’s start with Vitamin C. Most sources equate vitamin C with ascorbic acid, as though they were the same thing. They’re not. Ascorbic acid is an isolate, a fraction, a distillate of naturally occurring vitamin C. In addition to ascorbic acid, vitamin C must include rutin, bioflavonoids, Factor K, Factor J, Factor P, Tyrosinase, Ascorbinogen, and other components as shown in the figure below:

If any of these parts are missing, there is no vitamin C, no vitamin activity. When some of them are present, the body will draw on its own stores to make up the differences, so that the whole vitamin may be present. Only then will vitamin activity take place, provided that all other conditions and co-factors are present. Ascorbic acid is described merely as the “antioxidant wrapper” portion of vitamin C; ascorbic acid protects the functional parts of the vitamin from rapid oxidation or breakdown. (Somer p 58 “Vitamin C: A Lesson in Keeping An Open Mind” The Nutrition Report)

Over 90% of ascorbic acid in this country is manufactured at a facility in Nutley, New Jersey, owned by Hoffman-LaRoche, one of the world’s biggest drug manufacturers (1 800 526 0189). Here ascorbic acid is made from a process involving cornstarch and volatile acids. Most U.S. vitamin companies then buy the bulk ascorbic acid from this single facility. After that, marketing takes over. Each company makes its own labels, its own claims, and its own formulations, each one claiming to have the superior form of vitamin C, even though it all came from the same place, and it’s really not vitamin C at all.

From the outset, it is crucial to understand the difference between vitamins and vitamin activity. The vitamin is the biochemical complex. Vitamin activity means the actual biological and cellular changes that take place when the stage is set for the vitamin complex to act.

Think of it like gas and a car. Pumping the gas into the tank doesn’t necessarily mean the car is going anywhere. Other conditions and factors must be also present, in order for Activity to occur. The gas line to the carburetor must be clear, the carburetor jets must be set, there must be an exact mixture of air flow, the ignition must be turned on, the spark plugs must be clean, the exact amount of gas must reach each spark plug right before it fires, no gas must be left over in the cylinder after the plug fires. Getting the idea? If any of this stuff is missing, there’s no Activity: the car doesn’t run, or at least not very well.

Amazing as it may sound if you’re hearing this for the first time, vitamins are more than the synthetic fractions we are commonly taught they are. The ascorbic acid you buy at the grocery store every few weeks, thinking you are buying Vitamin C, is just a chemical copy of naturally occurring ascorbic acid, which itself is still only a fraction of the actual Vitamin C. Real vitamin C is part of something living, and as such, can impart life. Your synthetic, fractionated chemical ascorbic acid never grew in the ground, never saw the light of day, never was alive or part of anything alive. It’s a chemical, a cornstarch derivative, a sulfuric acid by-product. In your body it’s just another drug. Synthetic vitamins have toxic effects from mega-doses and actually can increase the white blood cell count. Vitamins are only necessary in minute quantities on a daily basis. Whole food vitamins, by contrast, are not toxic since the vitamin is complexed in its integral working form, and requires nothing from the body, and triggers no immune response.