The effect that cell phones have on health is a wild card for consumers right now. And because most people can’t live without their cell phone, it won’t change anytime soon. At this time, no one knows how much harm cell phone or EMF’s (electromagnetic frequencies) are doing to our health.

Back in 1996, when the Federal Communications Commission set a legal maximum on cell phone radiation, Motorola was touting its tiny $2,000 StarTac, the first clamshell phone and an early adopter of texting.

Sixteen years later, cell phones — with 6 billion subscriptions worldwide and counting — have revolutionized how we communicate. The technology that powers them has changed just as dramatically, yet those 16-year-old FCC rules still stand. 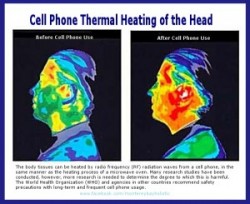 While these studies are good, they are not definitive and much more research is needed. They raise serious questions that cast doubt on the adequacy of the FCC rules to safeguard public health. The FCC emissions cap allows 20 times more radiation to reach the head than the body as a whole, does not account for risks to children’s developing brains and smaller bodies and considers only short-term cell phone use, not frequent calling patterns over decades.

The good news is, the agency is finally moving to meet the realities of the 21st century and the Information Age. On June 15, FCC chairman Julius Genachowski circulated a proposal to his four fellow commissioners calling for formal review of the 1996 regulations. To advance, his plan must be approved by a majority of the commissioners. If they agree, the FCC could take the long overdue step of modernizing its safety standards. But the pace is likely to be glacial.

In the meanwhile, my recommendation is that consumers take steps to reduce their exposures to cell phone radiation by: