Dr. Pottenger was a medical doctor who is best know for his famous 10 year nutritional “feeding study” that he carried out with hundreds of cats in the 1940’s. 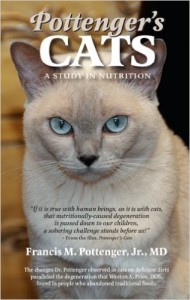 ood developed skeletal deformities over the generations, including the skull itself. The study also describes in detail all of the physical and emotional problems which developed in the cooked diet animal groups; those problems never occurred in the raw diet animal group.

This study stands alone in its ability to show the effects of consuming cooked or denatured foods on the cats, and likewise on people. It also demonstrated the effect of diet on future generations as
the cats in the cooked diet group lost their ability to reproduce after the third generation. Because of his findings, Dr. Pottenger concluded that a diet of 30% raw food was not sufficient enough to maintain good health. The diet must consist of at least 50% raw food in order to maintain and preserve good health for current and future generations.

As for applying his results to human nutrition, Dr. Pottenger said, “While no attempt will be
made to correlate the changes in the animals studied with malformations found in humans, the similarity is so obvious that parallel pictures will suggest themselves.”

Currently in America, people are eating more cooked and processed food than ever. As a result, large amounts of people are dealing with preventable health issues like type two diabetes, osteoporosis and heart disease. In addition, there are more and more clinics and drugs designed to help people who are dealing with infertility issues.

Today, Dr. Pottenger’s cat study would be considered epigenetic research. Epigenetic’s is the study of variations that are caused by external or environmental factors that switch genes on and off and affect how cells read genes instead of being caused by changes in the DNA sequence. Although we can not change our genetic code, we can change how are genes are expressed. Research has revealed that our gene expression is not solely determined by hereditary factors but also by our diet, nutritional status, toxicity and environmental influences.

Because of this understanding, natural health practitioners have begun to change genetic expression to help people restore their health. We now know, more than ever, that with a clinically designed whole food nutrition program and a reduction of environmental toxins, we have the power to influence and improve our health and our genetic expressions.

This is exciting news for people concerned about their genetics. Call today if you are interested in working with me to improve your genetic expression!