A GMO (genetically modified organism) is the result of a laboratory process of taking genes from one species and inserting them into another in an attempt to obtain a desired trait or characteristic. This process may be called either Genetic Engineering (GE) or Genetic Modification (GM); they are one and the same. (The goal here is for food to grow faster and resist disease—more crops=cheaper food. Also, these crops are designed to tolerate Monsanto’s pesticide round up, which would otherwise kill the plant and h 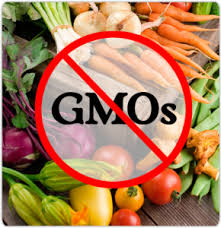 as been linked to endocrine disruption.)

But haven’t growers been grafting trees, breeding animals, and hybridizing seeds for years?

Genetic engineering is completely different from traditional breeding and carries unique risks. With genetic engineering, scientists can breach species barriers set up by nature. For example, they have spliced fish genes into tomatoes. The results are plants (or animals) with traits that would be virtually impossible to obtain with natural processes, such as crossbreeding or grafting.

How is genetic engineering done?

In order to breach these natural barriers and make possible the introduction of DNA from a different species, genetic engineers have to find ways to force the DNA from one organism into another. These methods include:

What foods are GM?

Currently commercialized GM crops in the U.S. include soy (91%), cotton (88%), canola (88%), corn (85%), Hawaiian papaya (more than 50%), zucchini and yellow squash (small amount), and tobacco (Quest® brand). About half of the sugar beets grown for sugar in 2008 were GM and current projections are that about 90% grown in 2009 will be GM. *You will recognize GM produce by the PLU code (the sticker with a 4-5 digit code on produce) GM produce will start with the number 8, organic produce starts with the number 9. If it is processed look for the words “non-gmo project.”

What are other sources of GMOs?

Products derived from the above, including oils from all four, soy protein, soy lecithin, cornstarch, corn syrup and high fructose corn syrup among others.  Also:

What about GM hormones in milk? Milk from rbGH (bovine growth hormone)-treated cows contains an increased amount of the hormone IGF-1, which is one of the highest risk factors associated with breast and prostate cancer, but no one is tracking this in relation to cancer rates.

1. GMOs are unhealthy. The American Academy of Environmental Medicine (AAEM) urges doctors to prescribe non-GMO diets for all patients. They cite animal studies showing organ damage, gastrointestinal and immune system disorders, accelerated aging, and infertility. Human studies show how genetically modified (GM) food can leave material behind inside us, possibly causing long-term problems. Genes inserted into GM soy, for example, can transfer into the DNA of bacteria living inside us, and that the toxic insecticide produced by GM corn was found in the blood of pregnant women and their unborn fetuses. Numerous health problems increased after GMOs were introduced in 1996. The percentage of Americans with three or more chronic illnesses jumped from 7% to 13% in just 9 years; food allergies skyrocketed, and disorders such as autism, reproductive disorders, digestive problems, and others are on the rise. Although there is not sufficient research to confirm that GMOs are a contributing factor, doctors groups such as the AAEM tell us not to wait before we start protecting ourselves, and especially our children who are most at risk. The American Public Health Association and American Nurses Association are among many medical groups that condemn the use of GM bovine growth hormone, because the milk from treated cows has more of the hormone IGF-1 (insulin-like growth factor 1)―which is linked to cancer.

2. GMOs contaminate―forever. GMOs cross pollinate and their seeds can travel. It is impossible to fully clean up our contaminated gene pool. Self-propagating GMO pollution will outlast the effects of global warming and nuclear waste. The potential impact is huge, threatening the health of future generations. GMO contamination has also caused economic losses for organic and non-GMO farmers who often struggle to keep their crops pure.

3. GMOs increase herbicide use. Most GM crops are engineered to be “herbicide tolerant”―to the deadly weed killer. Monsanto, for example, sells Roundup Ready crops, designed to survive applications of their Roundup herbicide. Between 1996 and 2008, US farmers sprayed an extra 383 million pounds of herbicide on GMOs. Overuse of Roundup results in “superweeds,” resistant to the herbicide. This is causing farmers to use even more toxic herbicides every year. Not only does this create environmental harm, GM foods contain higher residues of toxic herbicides. Roundup, for example, is linked with sterility, hormone disruption, birth defects, and cancer.

4. Genetic engineering creates dangerous side effects. By mixing genes from totally unrelated species, genetic engineering unleashes a host of unpredictable side effects. Moreover, irrespective of the type of genes that are inserted, the very process of creating a GM plant can result in massive collateral damage that produces new toxins, allergens, carcinogens, and nutritional deficiencies.

5. Government oversight is dangerously lax. Most of the health and environmental risks of GMOs are ignored by governments’ superficial regulations and safety assessments. The reason for this tragedy is largely political. The US Food and Drug Administration (FDA), for example, doesn’t require a single safety study, does not mandate labeling of GMOs, and allows companies to put their GM foods onto the market without even notifying the agency. Their justification was the claim that they had no information showing that GM foods were substantially different. But this was a lie. Secret agency memos made public by a lawsuit show that the overwhelming consensus even among the FDA’s own scientists was that GMOs can create unpredictable, hard-to-detect side effects. They urged long-term safety studies. But the White House had instructed the FDA to promote biotechnology, and the agency official in charge of policy was Michael Taylor, Monsanto’s former attorney, later their vice president. He’s now the US Food Safety Czar.

6. The biotech industry uses “tobacco science” to claim product safety. Biotech companies like Monsanto told us that Agent Orange, PCBs, and DDT were safe. They are now using the same type of superficial, rigged research to try and convince us that GMOs are safe. Independent scientists, however, have caught the spin-masters red-handed, demonstrating without doubt how industry-funded research is designed to avoid finding problems, and how adverse findings are distorted or denied.

7. Independent research and reporting is attacked and suppressed. Scientists who discover problems with GMOs have been attacked, gagged, fired, threatened, and denied funding. The journal Nature acknowledged that a “large block of scientists . . . denigrate research by other legitimate scientists in a knee-jerk, partisan, emotional way that is not helpful in advancing knowledge.” Attempts by media to expose problems are also often censored.

8. GMOs harm the environment. GM crops and their associated herbicides can harm birds, insects, amphibians, marine ecosystems, and soil organisms. They reduce bio-diversity, pollute water resources, and are unsustainable. For example, GM crops are eliminating habitat for monarch butterflies, whose populations are down 50% in the US. Roundup herbicide has been shown to cause birth defects in amphibians, embryonic deaths and endocrine disruptions, and organ damage in animals even at very low doses. GM canola has been found growing wild in North Dakota and California, threatening to pass on its herbicide tolerant genes on to weeds.

9. GMOs do not increase yields, and work against feeding a hungry world. Whereas sustainable non-GMO agricultural methods used in developing countries have conclusively resulted in yield increases of 79% and higher, GMOs do not, on average, increase yields at all. This was evident in the Union of Concerned Scientists’ 2009 report Failure to Yield―the definitive study to date on GM crops and yield.

The International Assessment of Agricultural Knowledge, Science and Technology for Development (IAASTD) report, authored by more than 400 scientists and backed by 58 governments, stated that GM crop yields were “highly variable” and in some cases, “yields declined.” The report noted, “Assessment of the technology lags behind its development, information is anecdotal and contradictory, and uncertainty about possible benefits and damage is unavoidable.” They determined that the current GMOs have nothing to offer the goals of reducing hunger and poverty, improving nutrition, health and rural livelihoods, and facilitating social and environmental sustainability.
On the contrary, GMOs divert money and resources that would otherwise be spent on more safe, reliable, and appropriate technologies.

10. By avoiding GMOs, you contribute to the coming tipping point of consumer rejection, forcing them out of our food supply.
Because GMOs give no consumer benefits, if even a small percentage of us start rejecting brands that contain them, GM ingredients will become a marketing liability. Food companies will kick them out. In Europe, for example, the tipping point was achieved in 1999, just after a high profile GMO safety scandal hit the papers and alerted citizens to the potential dangers. In the US, a consumer rebellion against GM bovine growth hormone has also reached a tipping point, kicked the cow drug out of dairy products by Wal-Mart, Starbucks, Dannon, Yoplait, and most of America’s dairies.

The Campaign for Healthier Eating in America is designed to achieve a tipping point against GMOs in the US. The number of non-GMO shoppers needed is probably just 5% of the population. The key is to educate consumers about the documented health dangers and provide a Non-GMO Shopping Guide to make avoiding GMOs much easier.

Please choose healthier non-GMO brands, tell others about GMOs so they can do the same, and join the Non-GMO Tipping Point Network. Together we can quickly reclaim a non-GMO food supply.